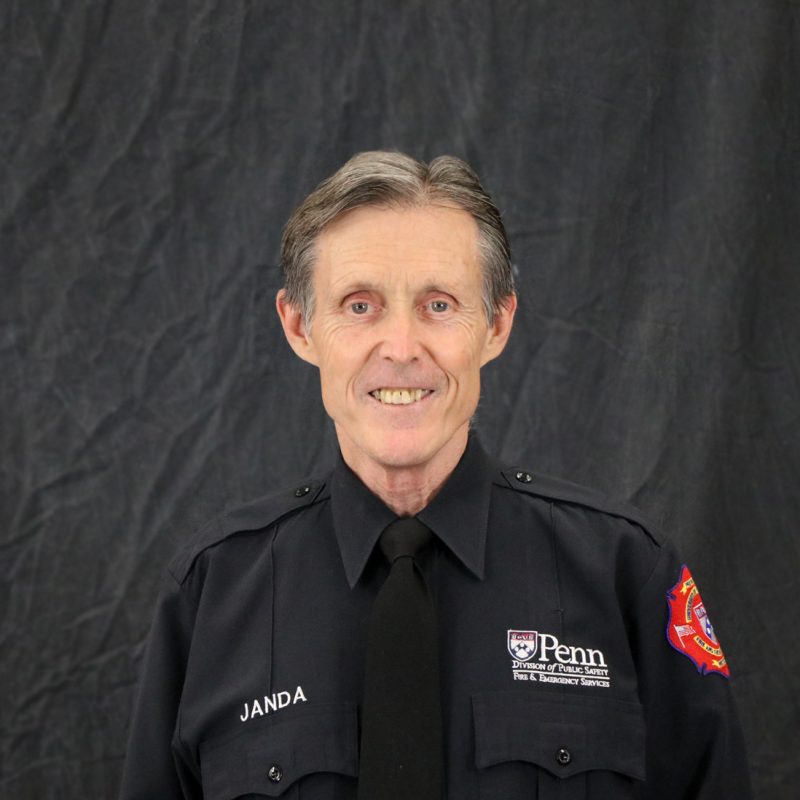 Eugene Janda has extensive fire safety and emergency preparedness experience from his 22 years with the Philadelphia Fire Department (PFD). During his tenure within the PFD, he rose to the rank of Fire Captain/Acting Battalion Chief. Within a six year period, he trained 660 firefighters (approximately 25% of the force) and indoctrinated 250 paramedics.

In March of 2000, Gene brought his expertise to Penn’s Division of Public Safety as a safety specialist in Fire & Emergency Services (previously called Fire & Occupational Safety). By December of 2003 Gene had assumed the role of Deputy Chief for Fire and Emergency Services overseeing the day-to-day operations of a team of 5 Safety Specialists. In April of 2008 Gene Janda became Chief of Fire & Emergency Services where he continues to provide a strong strategic direction for his team.

Gene’s specialties are plans review of construction and renovation projects, fire protection reliability, and emergency preparedness of the campus community. During Gene’s tenure at Penn he has assisted with the development of the University Crisis Management Plan, he is the Co-Chair for the University City Emergency Preparedness Steering Team and an operations advisor to the student managed Penn Medical Emergency Response Team.

Gene also holds a Certified Fire Protection Specialist (CFPS) designation from the National Fire Protection (NFPA), maintains his Emergency Medical Technician certification from the Commonwealth of Pennsylvania, and has a Masters’ of Environmental Studies degree from the University of Pennsylvania. Gene was awarded the Collegiate EMS Advisor of the Year Award, 2015–2016 from the National Collegiate Emergency Medical Services Foundation (NCEMSF).

The Department of Fire & Emergency Services (FES), in addition to implementing the University’s crisis emergency plan (see emergency preparedness), maintains an active partnership with the City of Philadelphia’s Department of Licenses & Inspection and Fire Department, in order to ensure compliance with all city, state and federal fire and building codes for the University.